Create an Account - Increase your productivity, customize your experience, and engage in information you care about.

Each locality collects its own trash using its own equipment. After collection, refuse trucks deliver the trash to the Resource Authority's Tinker Creek Transfer Station. The transfer station was designed by citizens and planners to resemble a Norfolk Southern shop or office building and to be an asset to the neighborhood.

At the transfer station, waste is loaded into specially-designed rail cars and covered with watertight lock-down lids. Each rail car holds 65 tons of waste, making them among the largest on the railroad. At the end of the day, all waste that has been collected and loaded into the rail cars is transported 33 miles on the Waste Line Express by Norfolk Southern to the landfill.

The Waste Line Express is a 10 to 12 car, custom-built train that hauls solid waste between the Roanoke Valley Resource Authority's Tinker Creek and Smith Gap stations. Each weekday evening, the train makes its 33-mile journey carrying waste collected from residents and businesses in the County of Roanoke, City of Roanoke, and the Town of Vinton. The Waste Line Express is owned by the Roanoke Valley Resource Authority and operated under contract with Norfolk Southern.

The Smith Gap Station is located on Bradshaw Road in the County of Roanoke. The building is designed to resemble a rural train station. Upon arriving at the landfill, the rail cars are uncoupled and positioned for unloading the following day. The train makes a daily trip to Smith Gap with the loaded cars from the transfer station and returns the same day with empty rail cars from the previous day's load. 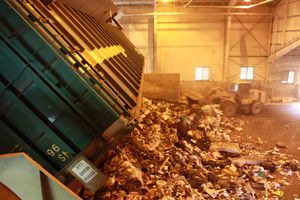 At the Smith Gap Station, the rail cars are unloaded using one of the largest rotary dumper in the world. The rail cars are rotated upside down to remove the waste. The unloading operation takes place inside the tipper building, where the waste is inspected and loaded into haul trucks.

Waste is placed in an environmentally protected landfill disposal area that meets all state and federal regulations.